The story of Story Story: 13 years of drama making a difference in Nigeria 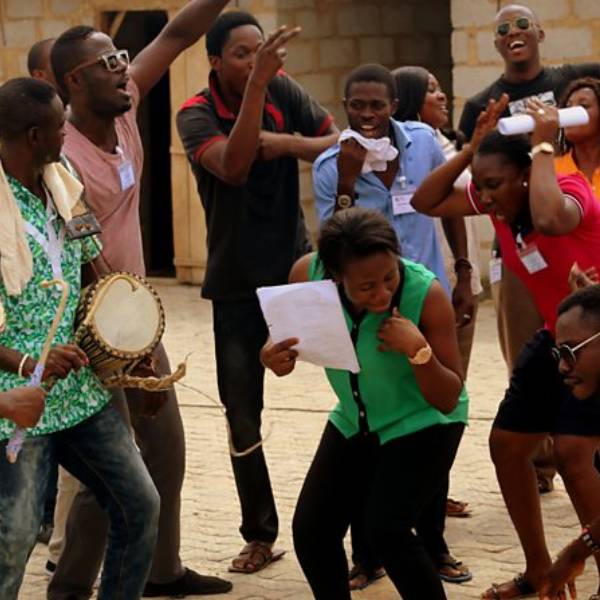 After more than 13 years, over 500 episodes and even a visit from The Queen, Story Story: Voices from the Market, is taking a break. As the last episode was broadcast on Sunday, Deji Arosho looks back at the history of the popular radio drama and its impact on listeners.

If you are not one of the 17 million Nigerians who regularly listen to Story Story: Voices from the Market let me fill you in.

Back in 2003 BBC Media Action created a radio drama to reflect the lives of ordinary Nigerians and to help them understand the issues impacting their lives. Set in a fictional market and motor park – places every large town in Nigeria has – we describe it as “somewhere in West Africa, somewhere near you”.

It started broadcasting on 20 radio stations. The episode on Sunday went out on 164 radio stations, making it a truly national programme. In addition the BBC World Service broadcast it across Africa and there’s been a Story Story podcast, so it’s reached an international audience too.

I joined series two as a (struggling) freelance writer and I’ve worn a lot of hats during my time with Story Story: writer, content researcher, script editor, producer, head of drama and now I’m head of production and training. Let’s just say I’ve been through the full food chain.

From the start, we wanted it to be character driven and not issue led. Mainly it is about people. All of us deal with so many things on a day to day basis – we deal with work, how our communities are run, our health and our relationships. All of this makes for wonderful, compelling drama.

Story Story is a composite of real life, so to make it as realistic as possible we recorded the drama outside on location, not in a studio. In the early days we visited markets and talked to people who interested us to understand their lives. We then turned them into characters in the drama, helping make it as real and diverse as possible.

We even welcomed HM the Queen to the set when she was on a state visit to Nigeria in 2003.

Drama gave us the chance to cover difficult issues.

At the time, the HIV story was highly sensitive but we knew we needed to talk about it. It was affecting people across Nigeria and West Africa, and halting its spread was part of the Millennium Development Goals. We wanted to talk about discrimination and condom use, so we decided that Madam Fati, a prominent character, should be HIV positive. It helped increase awareness about transmission and dispel stigma for those living with HIV. Madam Fati is still in the programme today.

As a writer, my favourite series was on the theme of environmental sustainability. The storyline was based around a rumour that there were diamonds in the area of the market place. So everyone went digging. People kept falling into holes dug by their neighbours looking for diamonds! It was funny and entertaining of course – but at a deeper level it was about how we are all responsible for our environment. If we destroy it we are destroying our lives.

Drama gave us the freedom to explore how the mining of natural resources can lead to degradation of the environment. Something which could have been difficult to cover in factual programmes because the economic mainstay of the country is from these industries.

But Story Story mirrors society to the extent you sometimes feel you are living in a documentary. When the audience considers the actions of their favourite characters in the drama it’s like a reflective moment. They see themselves in those situations and ask,”what would I do”? If they see a character they relate to making a positive change, it will motivate them. We wanted to capture that emotion and that’s what makes it so powerful.

In the run up to the last national elections in 2015, the drama centred on local elections but reflected what was going on nationally. We encouraged the audience to think about the bigger picture and the importance of peaceful participation in democracy while maintaining our neutrality – it worked.

More than 80% of listeners said their knowledge of key governance issues increased as a result of the programme. And we know that listeners were more likely to resolve conflict using peaceful means and vote than non-listeners.

For me, encouraging peaceful dialogue in communities rather than violence has been the biggest benefit of Story Story. From the early days that was what we really wanted to achieve, and it has carried on to the present day.

I will miss Story Story and so will its millions of listeners. We all hope it will return soon.